Neighborhood Beer Co. to kick off 2018 Beer for History

According to Neighborhood Beer Co.’s Salina McIntire, the museum’s Beer for History is one of their favorite events.

“We love coming here and working with the American Independence Museum to put on a fun beer event,” she said. “This is our third year here.”

Emma Bray, museum executive director, said she is excited to have Neighborhood Beer Co. kick off this year’s series, which take place at historic Folsom Tavern (c.1775). Other dates in the series include October 4, October 18 and November 1 with Earth Eagle Brewings, Throwback Brewery and von Trapp Brewing.

“It is wonderful to have Neighborhood kick off our 2018 series,” she said. “We are excited to put on family-friendly beer events.” 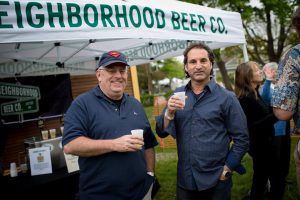 Since its inception in 2016, Beer for History has been sponsored by Hoefle Phoenix Gormley & Roberts, P.A. Attorneys at Law, a fact that Bray added has helped to its continued growth.

“It has been wonderful to have such a dedicated supporter behind this concept and series,” she said. “It enables us to plan and create a fun event that appeals as much to beer lovers as it does to families. All are welcome.”

This year, the series takes place at  Folsom Tavern from 6 pm to 8 pm on September 20, October 4, October 18 and November 1 with each date on a Thursday. In addition to craft beer, each event will feature music, light snacks and some form of historic entertainment, which may include colonial tavern games, colonial trivia, and/or escape room. In addition, Lexie’s Burger Bus will be present at every Beer for History except for the event on 10/4.

Tickets for each event are $15 for members and $20 for non members. Series tickets are $50 and $70 for members and nonmembers, respectively, while children (under 21) are $3. Ticket prices include beer (21+), entertainment, light snacks and more.

To purchase tickets, or learn more about Beer for History, visit www.independencemuseum.org.