Welcome
The People
The Trunk

In the Traveling Trunk program, you and your students will learn about key figures from Exeter, NH during the Revolution.

Ann was born in Milford, New Hampshire to John Taylor and Elizabeth Rogers and is a direct descendant of Mary Chilton, the first woman to step off the Mayflower.

In 1752, she married Nicholas Gilman, a merchant and wharf owner. They had eight children, six of whom survived into adulthood. Ann’s husband, Colonel Nicholas Gilman was appointed the Colonel of the 4th Regiment of Militia in New Hampshire on August 24, 1775 and he served at the Battle of Saratoga. He served on the 3rd Provincial Congress of 1775 and the Council of the State of NH in 1777. He also served as Treasurer of the Colony of New Hampshire, Justice of the Peace for Rockingham County, Committee of Safety, and Continental Loan officer for the state of NH.

Several of her children also played prominent roles in NH. Her son John Taylor Gilman was the longest term governor- non-consecutively and also read the Declaration of Independence to the town of Exeter when he was 22. Her son Nicholas Jr. served in the military as adjutant general and was at Valley Forge with Washington. He signed the Constitution for NH. As a mother and wife during the Revolution, she must have endured much as she had to manage the household and raise the family while her husband and sons were fighting for freedom, both on the battlefield and at home. She died in 1783.

Nicholas was born in 1755 to Nicholas Gilman, Sr. and Ann Taylor Gilman. His father was the treasurer for the state of NH during the Revolution, while Exeter was the state capital.

During the Revolutionary war, Nicholas served as adjutant, or administrative officer, of the 3rd New Hampshire Regiment. He spent the winter of 1777 at Valley Forge with George Washington. Gilman was promoted to the rank of Captain in July 1778 and served as Assistant Adjutant General for the Continental Army.

He signed the Constitution on behalf of New Hampshire, the ninth state to ratify the document, making it the law of the land.

Breaking with the rest of the Six Nations Confederacy, the Oneida sided with the Patriots during the American Revolution. The Confederacy consisted of the Oneida, Mohawk, Seneca, Onondaga, Cayuga and Tuscarora, and referred to itself as the “Haudenosaunee” or “The People of the Longhouse.”

Joined by the Tuscarora, the Oneida supported and fought for the American colonists. Even George Washington recognized their devotion saying, “The Oneidas have manifested the strongest Attachment to us throughout this Dispute . . .” The Oneida were very important to the war, and served Washington as scouts or spies, as well as soldiers. During the Revolution, the Oneida proved themselves at the Battle of Oriskany and the Battle of Barren Hill, among others; during 1777-8, men were sent to Valley Forge to serve with Washington, as well. 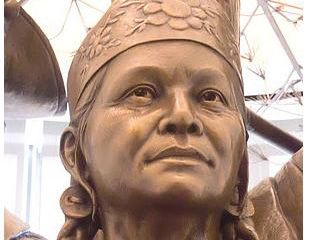 In the Oneida Nation, there is a story, passed down from generation to generation, of a brave Oneida woman named Polly Cooper.  She is said to have helped George Washington’s men during the terrible winter of 1777-78 at Valley Forge. Suffering from sickness, lack of food and provisions, the army was helped by Chief Shenendoah of the Oneida, who offered corn to the troops.

Polly cooked for the men, brought them water and taught them how to prepare the food.  It is said that during battle, she offered water to both sides- the British and colonials- because to her, the battle was not about food or water, but something bigger.

Polly refused to take any sort of payment for her aid to the men during the war. A gift of a black shawl, one she had seen in a shop window while walking with the wives of the officers, was given to her by Congress in appreciation. That shawl is still owned by descendants in the Oneida Nation.

Previous Slide
Back to Program
Next Slide