Tavern Talk 1776: “The Year of William Moultrie, the Battle of Sullivan’s Island, and the Declaration of Independence” 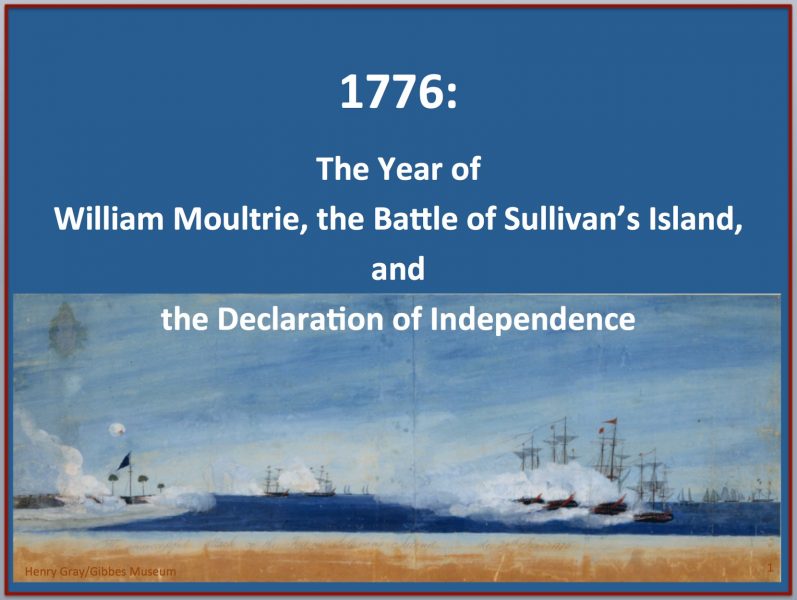 REGISTER
Join us for this virtual presentation as part of our re-imagined American Independence Festival!

Seventeen seventy-six is considered the seminal year of our nation’s history, and the drafting, adoption, and signing of the Declaration of Independence in Philadelphia were pivotal events.

In faraway Charleston, South Carolina, however, circumstances were unfolding that would profoundly affect the course of our newly-declared sovereignty—a collision between inexperienced South Carolina provincial troops and the military might of the British empire.

In “1776: The Year of William Moultrie, the Battle of Sullivan’s Island, and the Declaration of Independence,” author Chip Bragg chronicles the rise of South Carolina’s iconic patriot, Brig. Gen. William Moultrie, his defense of a small palmetto-log fort in Charleston harbor on June 28, 1776, and the consequences of America’s first significant Revolutionary War victory.

About the presenter
Chip Bragg is a recently retired anesthesiologist from Thomasville, Georgia where he has lived and practiced medicine for the past 31 years. His lifelong passion for American history has resulted in the publication of four books. He is currently the chairman of the education committee of the Society of the Cincinnati. His most recent book, of which he is coauthor, is Patriots in Exile: Charleston Rebels in St. Augustine during the American Revolution. It is scheduled for release in July 2020.